Our woman crush Wednesday this week are some gorge

Our #mcm this week is Brian Paonessa of @ffnworld

Dr. Lane Smith was raised in a large family where he was the oldest of 10 children. As you can imagine, being the oldest taught him responsibility early on. He looked up to his father who was a physician who specialized in Psychiatry. Because of the passion his father showed for his work and his dedication to the community, that inspired Dr. Smith from a young age to become a doctor as well. Dr. Smith feels that his role in his family was one of the reasons he has such a strong work ethic which has served him well throughout his professional career.
Dr. Smith can be described as an overachiever at times, and this was especially noticeable in his academics. He excelled in both academics and sports and graduated early from high school, giving him the honor of graduating college at the age of only 18. Soon after, he chose to embark on a service mission for his church, but nonetheless once returning, he was determined to reach his goal of being a physician and was accepted into the University of Utah Medical School as the youngest in his class at the age of 20.“I was fortunate to graduate as one of the top in my medical school and was awarded membership in the Alpha Omega Alpha honor society. This awarded membership is the highest academic honor given to medical students,” adds Smith.
During medical school he developed a love for surgery as it appeared that all the toughest and most challenging cases were referred to the surgeons and he was inspired by the amazing changes and impact that surgery had on people’s lives. “Surgery also required a bit of athleticism and hand-eye coordination, which blended well with my history as an athlete in high school and college. Initially, I was attracted to Ear, Nose, Throat-Head and Neck Surgery as a surgical specialty. I traveled to one of the best schools for this specialty, at the time, the University of Texas Medical Branch located in Galveston. I also received the highest score in the nation on the federal licensure exam—one of two national exams all medical students must pass to become a physician.
”Dr. Lane Smith completed a fellowship in Facial Plastic Surgery at Stanford University and his Plastic Surgery Training at the Mayo Clinic. During his many years of training, Dr. Smith has had the opportunity to live in all parts of the country and to train at some of the finest medical institutions in the world. This training and experience have helped shape his philosophy regarding medicine, as well as plastic surgery specifically. Plastic surgery is a combination of science and art. Dr. Smith has been blessed to have a very artistic sense. He treats every surgery as if it is a work of art, something that he wants to be proud of when it is finished.

Over the past 20 years he has built one of the largest and most successful plastic surgery practices in North America and he performs over 1350 cosmetic cases a year. His talent and experience have brought patients from all over the world to his practice in Las Vegas, Nevada to have their cosmetic procedures performed by one of the best in the business. He has become one of the busiest plastic surgeons in the United States and continues to grow his practice with innovative technologies and he pledges to never stop learning techniques that will help all his patients feel like thier most beautiful selves. 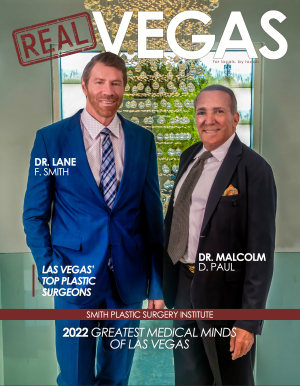