Our woman crush Wednesday this week are some gorge

Our #mcm this week is Brian Paonessa of @ffnworld

Whether Marc Agrees with Your Beliefs or not, it’s Irrelevant

Here’s a Man who Fights for You to Possess and Speak Openly About Your Beliefs.

When we got the opportunity to catch up with Mr. Marc Randazza of Randazza Legal Group, I let him know my initial thought and statement surrounding the entire COVID-19 situation. I told him, “Prior to everything happening with the lock-downs, etc. I immediately thought and stated, “this feels like a human behavioral science project.” Mark sort of laughed underneath his breath. He said, “You want to know what my initial thought and statement was?” I said, “yes, what was that?” He continues, “You watch, no matter how many people die from this, our civil liberties are going to be the biggest casualty.” Seemingly both in agreement.

Marc continued on sharing his insightful and educated input: “After 9/11, you found every authoritarian on the right having a wet dream of how many of our civil rights they could strip away from us. Both parties are equally guilty of this. Now the liberal party is using the exact playbook of the George Bush administration.”

Surrounding authority, especially when someone who never had authority gets a taste of it, the thought of having that sense of control, by locking people down, all the while not following the same roles themselves, seems hypocritical and absurd to me. Marc states, “let’s take that douchebag who runs California, the Mayor of San Francisco with her excusing herself for not being accountable to what she’s requiring of those in San Francisco… She literally says: I’m feeling it; making an excuse for not following the same rules she’s mandating and requiring of others in her city. She’s partying and feeling it? How ridiculous, adds Marc. Nevada used to be a pretty libertarian place. Both the parties in Nevada were not like their national counterparts.”

Marc does agree with restraints that make sense, not conforming to the social norm and mandates or things that didn’t work the 1st time. Marc referenced many ridiculous requirements following 9/11. “I disagreed with the ridiculous things that were implemented that didn’t make any sense, like allowing TSA to grope you in the name of safety and being forced to throw away your bottle of water, only to pass through security to go a few steps and buy a new bottle of water.” What he did agree with was one thing in specific that did make sense, like the requirement to barricade cockpit doors. He says, “that was one of the only things that made sense from requirements after 9/11.” These devices have proven effective in creating a physical barricade to prevent hostile individuals from reaching the flight deck any time the cockpit door is open during flight. Secondary barriers ensure the flight deck remains secure at all times.

Marc continues, “I would never imagine asking someone; have you had an abortion before you come into my restaurant? Vax issue have become more about who we do and don’t like. There have been irrational sides of the vaccination. It’s like if you know you have cancer, but you still have the choice of refusing chemo treatments. It’s my belief that decision and choice should be between you and your Doctor.”

What we are seeing here is the powers at be currently instituting draconian measures they claim “for our safety” in a continued effort make the world a better place. “We no longer are living in a free society, adds Marc.” Personally, I’m a firm believer in encouraging free thinking. The minute you stop questioning things that don’t make sense to your core beliefs and values, you’re simply following what people you believe are saying and requiring you to do with little to no thought behind why you are doing said thing in the 1st place. That what a society built on civil liberties is.

When we asked Marc his opinion on vaccine passports, he said, “this is far more about identifying that the majority of people who are for vaccine passport mandates and people who feel that way tend to be more, right wing. He said, “think of young athletic teenage boys who are more likely to have a heart problem than to get COVID. Democrats don’t push that because they don’t get elected on people who give a f*** about teenage athletes.”

When we asked him about employees who are being forced to receive these vaccines against their wishes/beliefs to remain gainfully employed as well as CCSD teachers being mandated to be allowed to continue teaching, etc., his response was simply, “Isn’t it a great way to get rid of the conservative teachers? Even casino employees, as long as you can exclude them, they will succeed at pushing them out of society.”

Marc referenced Jacobson vs. Massachusetts in 1905, stating that “Smallpox is way scarier than this. Your chance of dying from this is next to nothing.

We asked Randazza’s opinion on a question 1 reader sent into us about the recent Texas new abortion law. Question: The fact that a supposedly Catholic president pledges to “protect and defend” abortion rights, etc. My body, my choice. But yet, the same doesn’t apply to the vaccine mandate(s)? Marc answered, “I’m not in favor of abortions. But this law is terrifying; it’s not what the people who are screaming about it think. They don’t even know what they are talking about. Take Marbury vs. Madison, for instance. This is the 1st case you study in constitutional law; the courts have the right to review a state statue, so that you can have the right to sue a state for an unconstitutional law, but yet the state doesn’t enforce the law. If this law stands, what if you stop Charlie Baker, the p**** governor of Massachusetts. If you feel afraid that your neighbor has a gun, you can sue everyone that helped them to get that gun.

You don’t like someone’s free speech rights that the feminists pushed in Indianapolis? Sue anyone who sold or possessed pornography. That’s been society’s reactions to stripping away our constitutional rights, which seemingly dismantles our entire system of judicial review. With this law, the state can continue acting unconstitutionally, but prevents the state from being reviewed by a court.”

We very much appreciate Marc taking the time to connect with us and his insight as a well-respected 1st amendment lawyer here in Las Vegas and across the US. 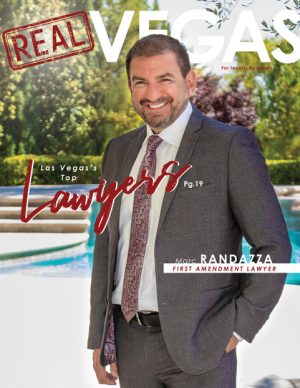