Ever wonder why fast food restaurants take away fa

And his Defensive Line Foundation

In Partnership with Hope Means Nevada

San Manuel Band of Mission Indians to present $40,000 to 4 organizations in support of youth mental health

Event is not open to the public but will be livestreamed

The city of Las Vegas, in partnership with the Mayor’s Fund for Las Vegas LIFE, Hope Means Nevada, Lady Gaga’s Born This Way Foundation, and Las Vegas Raiders Solomon Thomas’ The Defensive Line Foundation, will host a youth mental health conversation as part of the city’s commitment to supporting mental wellness. The event will be livestreamed at livestream.com/cityoflasvegas as well as on the city’s Facebook and Twitter channels.

Local youth from the city’s Batteries Included, an initiative designed to help teens reach their greatest potential, will be in the audience as Thomas shares his personal story. Raiders’ therapist Dr. Sheldon A. Jacobs will facilitate a question-and-answer session with the students and lead them through a journal exercise.

At the event, a representative from the San Manuel Band of Mission Indians will present $10,000 each to four nonprofits in support of youth mental health.  Recipients include The Defensive Line Foundation, the Mayor’s Fund for Las Vegas LIFE to support the Batteries Included program, Hope Means Nevada and the Born This Way Foundation. 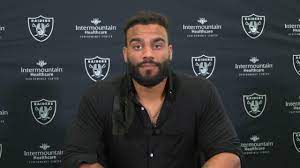 The event will be livestreamed at livestream.com/cityoflasvegas as well as on the city’s Facebook and Twitter channels. 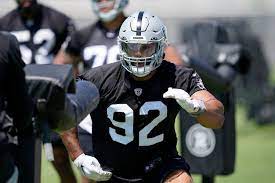 About The Mayor’s Fund for Las Vegas LIFE

The Mayor’s Fund for Las Vegas LIFE was established in 2018 as a vehicle for corporate and philanthropic partners to support innovative programs that improve quality of life for all Las Vegas residents with a special focus on vulnerable populations. The Fund creates opportunities for public-private partnerships as well as donations of cash, time and in-kind goods and services.  Guided by a diverse group of community leaders who serve as members of the Fund’s Advisory Committee, The Fund targets specific community needs with a goal of making Las Vegas a national leader in four areas:  Livability, Innovation, Future and Education. The Nevada Community Foundation, a public charity under Section 501 (c)(3) of the Internal Revenue Code, serves as the Mayor’s Fund fiscal agent, receiving all private donations.  Donations to the Nevada Community Foundation for the Mayor’s Fund are tax-deductible to the extent allowed by law.

Hope Means Nevada is a community-based initiative of nonprofit Nevada Medical Center focused on reversing the youth suicide trend in Nevada by inspiring a culture of empathy and advocacy around mental health. Created to raise overall awareness around Nevada’s high rates of mental health challenges and teen suicide in Nevada, Hope Means Nevada acknowledges teens may be encountering increased levels of stress, anxiety and depression due to the impact of COVID-19. For more information about Hope Means Nevada, go to www.hopemeansnevada.org, Facebook, Twitter, Instagram. The National Suicide Prevention Hotline number is (800) 273-8255 or Text “Home” to 741741.

About the Defensive Line Foundation

The Defensive Line Foundation is dedicated to end the epidemic of youth suicide, especially for young people of color, by transforming the way we communicate and connect about mental health. It was established by Las Vegas Raiders Defensive Tackle, Solomon Thomas and his parents Chris and Martha in honor of his beloved sister and their daughter Ella Elizabeth Thomas.

About Born This Way Foundation

Born This Way Foundation, co-founded and led by Lady Gaga and her mother, Cynthia Germanotta, supports the mental health of young people and works with them to create a kinder and braver world. Through high impact programming, youth led conversation and strategic, cross-sectoral partnerships, we aim to make kindness cool, validate the emotions of young people, and eliminate the stigma surrounding mental health.

About the San Manuel Band of Mission Indians

The San Manuel Band of Serrano Mission Indians is a federally recognized American Indian tribe located near the city of Highland, Calif. The Serrano Indians are the indigenous people of the San Bernardino highlands, passes, valleys and mountains who share a common language and culture. The San Manuel reservation was established in 1891 and recognized as a sovereign nation with the right of self-government. As an indigenous community the origins and history of the San Manuel Band of Mission Indians stem from our relationship with the land and to all who share it. Since ancient times we have expressed ourselves through a culture of giving. Today, San Manuel is able to answer the call of Yawa’ (Serrano word meaning “to act on one’s beliefs”) through partnerships with charitable organizations. We have drawn upon our history, knowledge, expertise and cultural values to direct our philanthropic giving in our local region, as well as to Native American causes nationwide.