Renderings for the brand new 36-story guitar tower, scheduled to debut in 2025 on the Las Vegas strip were presented to the Nevada Gaming Control Board for approval anticipated to come on December 16th. This additional building will add an additional 800-1000 new rooms to the former Mirage Hotel and Casino. Owned by the Seminole Tribe of Florida, they announced their intent on purchasing the operations of The Mirage from MGM Resorts International for $1.075 billion in cash. That deal took place earlier this year and they are expected to officially take over as of December 19, 2022. Hard Rock to continue operating the Mirage as is for at least 18 months. The brand new guitar tower will be built where the artificial volcano was at the Mirage that Steve Wynn built back in 1989. They will also be renovating the current structures and will be adding 80,000 square feet to the gaming floor. In addition to those renovations, the company has announced that they will be adding a 3,000 person theater, the pool area, villas, suites and meeting spaces will also receive a facelift. 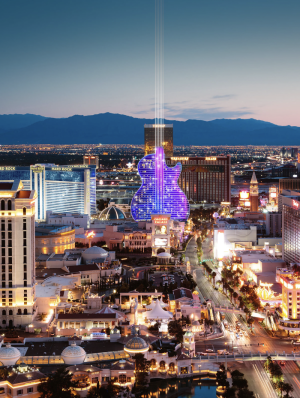 The new tower will boast 6 light beams that are expected to shoot 20,000 feet up into the sky that will act as guitar strings on the cropped neck of the guitar shaped building. 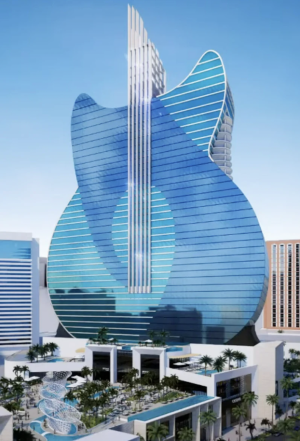 Hard Rock International is said to own the most valuable and largest authentic music memorabilia collection, with upwards of 86,000+ articles. Their stellar collection of memorabilia has helped grow the brand in terms of relevance and prominence at various properties.

Since the Seminole Tribe has taken over, global expansion has been fast-tracked. Very impressive for a tribe that entered into the gaming industry with bingo halls back in 1979. The new property is expected to change the face of the Las Vegas Strip.

Las Vegas locals are excited for the new structure and opening, as they have been patronizing the previous Hard Rock Hotel & Casino from it’s opening in 1995 to its closing in 2020.