“This partnership is what they call a no-brainer. The hottest magazine in Vegas teaming up with the hottest studio…” says Sticky Paws Studios Founder/CEO, Jon Orlando. 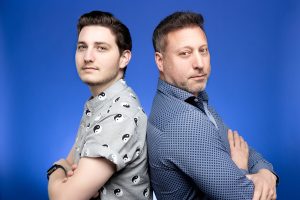 (From left to right: Travis “Chief Nerd” Flesher and Jon “the Wolf” Orlando)

Sticky Paws Studios is a full-service production company that offers podcast production, video production, and creative consulting services. The studio was founded by long time Podcaster and former Comedian, Jon Orlando (son of legendary entertainer Tony Orlando) whom has worked with several Las Vegas Strip properties and local businesses by helping them create “sticky” content that resonates with consumers.  “We live in a time where magazine ads and billboards aren’t effective anymore. People aren’t even looking up at billboards, they’re too busy looking down at their cell phones…Down is the new up!” says Orlando. He further adds, “If you have a business or personal brand, you will have your own podcast in the next 12 -24 months…You just don’t know it yet.”

This is a new era of turnkey marketing, branding and advertorial long form content creation (Audio and Video Podcasting) has captured the attention of Las Vegas business looking to reach their consumers.

The last time industry has had the opportunity to reach their consumers’ attention where they live on this level was when TV advertising exploded in the 1960’s. Today the new vehicle to reach the market is the smart phone and the new TV programs are in the form of long for content creation that is cut into micro content which is then used on all social media platforms to reach their targeted audience where they are now spending 2 to 6 hours a day on average.

“In 2021, If you aren’t producing both long form and short form audio/video content at scale, and distributing that content across all social media platforms to promote your business you’re making a huge mistake… at Sticky Paws Studios we help our clients create that content”, says Travis Flesher, Chief Nerd/VP of Content @Sticky Paws.

The first of what will be many projects, Sticky Paws and Real Vegas Magazine collaborate on will be launching The Real Vegas Junkeez Podcast hosted by Adam Lieberman and Natali Tangherlini. You may recognize Natalie from the sidelines during Las Vegas Raiders games performing as a Raiderette, or as a professional dancer in multiple shows on the Las Vegas Strip over the years. Adam Lieberman comes from an entertainment upbringing as well. His father, the late Frank Lieberman was a publicist to the stars for many years including Siegfried and Roy, Tony Danza, and even The King himself, Elvis Presley back in the day. Adam is considered by many to be the “Unofficial Mayor of Las Vegas”. Real Vegas Junkeez will be an “Entertainment Tonight” style show that will feature not only Las Vegas Entertainers but also local business leaders, restauranteurs, doctors, etc.  stickypawsstudios.com 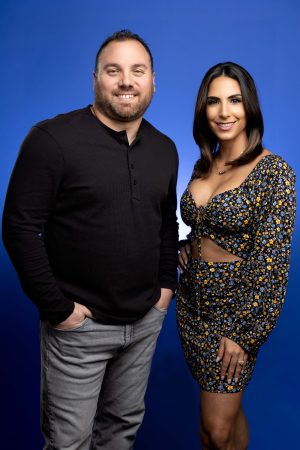 (From left to right: Adam “The Mayor” Lieberman and Natali “The Dancer” Tangherlini Sticky Paws Studios)

CEO and Publisher of Real Vegas Magazine, Candice Wiener adds, “Print magazines are never going to completely die in my opinion. As a Publisher who has extensively studied the power of print campaign in its entirety, print will continue to be the longest lasting form of advertising; albeit we are proponents of evolving with the times and there is no doubt in my mind that this will be a powerful partnership that is mutually beneficial for both our Real Vegas and Sticky Paws brands. In times like today where just about all of us are indentured servants to our digital devices on a day-to-day basis, the thought of engaging with an actual tangible magazine when we afford ourselves the opportunity to power down our digital devices, makes a lot of sense to those who still in fact read and ingest news through print and digital platforms. Additionally, we are excited to embark upon the newest trend of creating podcast and video content that becomes PR gold in the fact that you can splice it for shorter social media engagement and so much more that Sticky Paws has to offer. This is going to be an amazing marriage/partnership and I find it next to impossible to drop a happy cry at a wedding! Stay tuned for more exciting news to come from this dynamic partnership I like to look at as a wedding!