The time was shortly after 10pm, nearing the end of the shift, when an urgent sounding female voice came over the police scanner.   “Shots fired.  At least eighteen, possibly nineteen victims.  Some fatalities.  This is an active shooter.”  I heard it myself and remember thinking, was this real?  Nineteen victims?  You can generally tell the seriousness of a situation by the tone of the dispatcher’s voice.  The assignment editor, director, producer and I all heard it.  This WAS as real as it gets!  I ran to the studio and my co-staffers rushed to their positions as well.  We knew we would be breaking into programming very shortly, even though we had no confirmation of what was actually going on, or what would happen next.

That for me was the start of One October, what would become the single most significant event of my broadcast career.  For the next five hours I would remain on set, eventually joined by my colleagues Reed Cowan and Latoya Silmon.  My friend Phil Ramos, a retired Metro Homicide Detective, would join us as well.  What followed was a tidal wave of information and questions.  My cell phone, everyone’s phone was buzzing non-stop.  “I think there’s something going on at Mandalay Bay.”  “I think we’re under attack.”  “Is this terrorism?”  After all, the 9-11 attackers did spend time in Las Vegas.  We did our best to analyze what was happening and broadcast information that was not just factual, but helpful.  I’d never before felt such a responsibility at my job, or to my community.  People desperately wanted to know what was happening.  The actual facts unfortunately materialized slowly:  The victims were at the Route 91 Country Music Festival.  The shots were coming from Mandalay Bay.  Clearly there would be more than 19 victims.  That much we did know.  Police and other authorities initially were not communicating with the media as they would typically, which sometimes occurs when a situation is still fluid.  We knew this situation was unique, but it was frustrating.  I personally had to rely on my own police and fire sources who were providing me information in a non-official capacity.  The texts and information from the public however continued to pour in, “There are multiple shooters and victims at several casinos.”  “We’re hearing there’s a shooter in a helicopter.”  These turned out not to be true, and thankfully we didn’t report them.  It was difficult to determine what was real and what wasn’t.  We knew there was a lot of suffering, a lot of blood, and we also knew it was still in progress.  Our two field reporters, Nathan O’Neil and Christy Wilcox had arrived on scene within minutes, so we cut to them live as much as possible.  I remember seeing panicked people running in the background of their video feed, also armored SWAT vehicles speeding through.  I thought to myself, okay good Metro is on it.  They’ll end this.  I also remember feeling a sense of pride about our reporters and their willingness to brave a dangerous situation to do their jobs.  They too were First Responders.  It was about that time we started to receive cell phone footage with audio of the gun shots.  So many shots fired.  It had to be automatic weapons.  How many victims were there now?  Emotion set in for some of us as we heard about people being carried out, young people, families who had attended the concert together.  Then I received a text from our Chief Meteorologist Kevin Janison, “What do we know?  My daughter was at that concert.”  We also received phone calls from two KSNV employees who were at the concert as well and were still hunkered down behind a building waiting for evacuation orders from police.  It didn’t take long for us to realize this event, this tragedy, would affect our entire community.  All of us!  Thankfully Kevin’s daughter and the two KSNV employees did get out safely.  Too many others did not.

Our non-stop coverage would continue for several days.  I was impressed by my colleagues and the way they handled both the crisis and the response.  We began to learn about the individuals affected, and about the heroes who acted bravely as shots were still being fired.  Again, these were emotional days.  At times people in the newsroom broke down.  And why wouldn’t they?  Everyone knew someone at that concert.  I was also equally moved by how the community stepped up, churches, organizations, elected officials.  I received countless calls from people asking, “How can I help?”  It was all very humbling.  One friend of mine owns restaurants here in town and she temporarily shut them down so that they could prepare and deliver meals for victim’s families and first responders.  There were many, many stories like this.  The blood banks were turning people away because they already had more than enough blood donations.  Financial donations also came pouring in.  Then came the miracle of the Vegas Golden Knights.  Amazing to think a brand new sports franchise could help heal and unite a community, but that’s exactly what happened.

One October and the days that followed is a time when I grieved for my community, but also loved my community like never before.  It was in those days we became Vegas Strong. 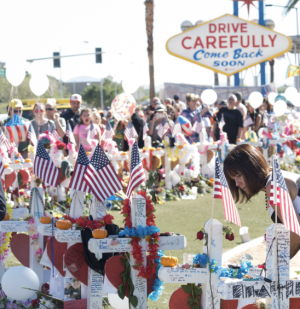 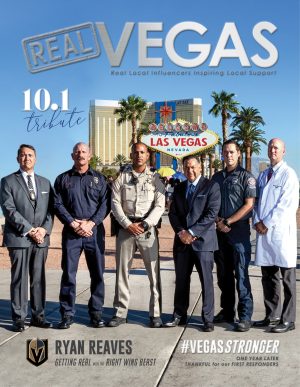