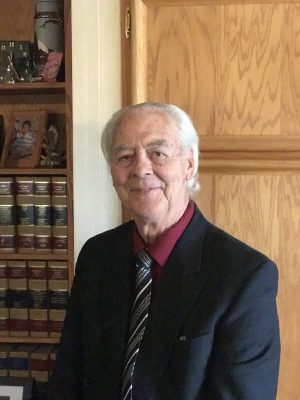 There are so many magnificent words anyone could and would use to describe the Honorable William Bill Terry. He was one of the big-time old-school Las Vegas attorneys whose reputation was larger than life, but he was about as humble as they come! Hearing on his passing away on January 15th, 2021, I was instantly filled with sadness and sorrow for his family and everyone that knew and loved him. I was quickly brought to tears as I recollected my own experiences with Bill and what an incredible attorney and human being this man was. Then, later reading the comments and many locals’ memories about Bill and his sound character brought me to tears once again.

Having been related to another old school, powerhouse attorney, my late Grandfather, Mr. Louis Wiener, I was already well aware of Bill’s phenomenal stature within the Las Vegas legal community. I knew him to be one of the best attorneys in town and I recalled watching the entire Binion trial on TV when I was pregnant so I was house and dog-sitting for my uncle and aunt at that time. I immediately admired his business acumen in the courthouse and stared in awe of how intelligent he was and how savvy he was at representing his clients. It was my personal opinion that his defendant was guilty; and having met her months prior at Ted Binion’s home, I definitely didn’t have a good first impression about his defendant. But you couldn’t not admire his tenacity in infighting for her whether he believed she was innocent or not. I realized that he was simply doing his job. And was damn good at it as well!

My first personal encounter with Bill was on or around July 27th, 2017, I contacted Mr. Bill Terry’s office based on an urgent personal situation that arose with a family member. His receptionist assured me that he’d be in the office within about an hour and would call me back. It was less than 15 minutes, and I got the return call from Bill. He asked me for a little more detail about the individual’s behalf that I was calling on and stated that he wanted to call me back right away based on the severity of the case and he mentioned that in all his years, he had parents call him on behalf of their children, but not the other way around and he was intrigued to know more.

That family member and myself went to Bill’s office to meet him at 12 pm on Friday, July 28th (and I recall the exact date as that date was my baby brother’s birthday who had passed away long before, so I could never forget that date). We spoke about my grandfather, and he mentioned to me that he had an affinity of love and respect for my late grandfather and added“ I’m not much of a funeral guy, but I went to your grandfather’s funeral,” and I told him obviously I was there as well. We then spoke about another family member who had retained Bill for his troubled adopted children who were often in trouble with the law, and he told me what a great client he was.

Then we addressed the reason we were there and the heinous allegation as to why we were there to meet with him. He gave some sound and solid advice and provided a bit of comfort. We left his office, and I advised the individual to retain him for the $7500. We went back to the family member’s office; his accountant wrote the check, and I went back down to Bill’s office to drop it off.

Truly with Bill in your corner and representing you, you were instantly given a feeling of assurance that it was highly unlikely the criminal case would go anywhere. Even the LVMPD sex crimes detectives all the way to the DA’s office knew with Billon the case as the criminal defense attorney, it was doubtful it would even be prosecuted.

We didn’t hear much for about 6-9 months and things seemed to quietly calm down. Then around the 2nd week in April 2018, the same family member asked me to find another attorney who would write a demand letter for someone who he contracted to do business for him that he claimed she didn’t do to his satisfaction, so as a good-hearted, supportive family member,I did just that. The demand letter was sent on or around April 17, 2018, and it wasn’t until June 6, 2018, that the reply letter to that demand letter came across my desk. I was somewhat shocked at this 2nd heinous allegation, and I immediately contacted Bill. He was my 1st call and his response when I told him of the news also sort of shocked me. He said, “Candice, can I ask you a very candid question?” My voice sort of stammered as I replied, “Mmmhmm, yes.” He continued, “do you believe that there is any validity to this claim?” I replied, “Bill, I’d be remiss if I said I didn’t. I felt in my gut, this was no coincidental pattern.”He replied, “that’s exactly what I thought,” and he continued that the said individual was far too careless and unheeding. He continued to explain that back in the 1960s, it was socially acceptable to call your law clerk ‘sweetie’ or ‘honey’, but he cautioned that in today’s time of the whole #METOO, Harvey Weinstein era that we are living in, that it’s no longer ok to be so careless and flirty toward co-workers. I was picking up what he was putting down and agreed with him that I was going to confront the individual with his admonishment. Needless to say, I wasn’t met with respect or gratitude of trying to help him protect his assets and stop with that kind of behavior. But Bill knew that would likely be the case and that I would likely be met defensive and hostile behavior and boy, was he right once again. But I tried and Bill tried to no avail.

Bill was truly such a man of strength and integrity and will always be remembered in the Las Vegas community as one of the legal greats of all time! Las Vegas was truly blessed with a wise, caring, and honest man with the utmost values from Chicago, Illinois. Bill was born on August 31, 1946 and passed away at the age of 74 after his battle with cancer. Close friends and family say that Bill was a devout Catholic and that his family was his number 1. And that seems 100% what I also believed to be true of him and another reason why his legacy in our Las Vegas community will live on, and he will be remembered as one of the all-time greatest attorneys our community has ever had the pleasure of knowing. Our sincere respect to his family and loved ones, we are thankful to have known him.